Unless you've been living under a rock, you've heard about composting. However, did you know that there are different ways of composting? And, while the majority of us know the traditional and the open-air composting, only rare folks have ever heard about bokashi composting. Moreover, if we are technically correct, bokashi composting is in fact, bokashi fermentation. As such, we will do an overview composting vs fermentation comparison in today's article. Furthermore, after learning about some impressive facts about bokashi fermentation, we dare to promise that you'll be eager to start using this awesome organic-waste-managing method.

Composting vs fermentation: what's the key difference between the two processes

There are several factors affecting the composting process. The same is true for fermentation. The most important aspects include moisture levels (water), carbon and nitrogen ratio (C:N), and the amount of oxygen. And out of these key factors, the amount of oxygen is the key player. As such, the levels of O2 determine whether the decomposition of organic matter will be considered as composting (aerobic decomposition) or fermentation (anaerobic decomposition). This means that whenever the decomposition of organic matter is stimulating life and the O2 concentration is below 5 mg/l, we have fermentation on our hands.

Now that you know that oxygen concentration is the key for the "composting vs fermentation" discussion, we can take a closer look at this comparison.

Composting vs fermentation: main advantages of the bokashi method

Before we take this discussion any further, we need to point out that we have nothing against traditional, open-air, or any other type of composting. In fact, in many cases, combining the bokashi method with either traditional or open-air composting can bring the most optimal holistic solution. However, there are aspects that make bokashi fermentation an overall better solution for organic waste management. As it turns out, the bokashi method is both user and environment friendlier.

So, what are the main advantages of the bokashi method? Here's a list of the most important aspects of the "composting vs fermentation" comparison: 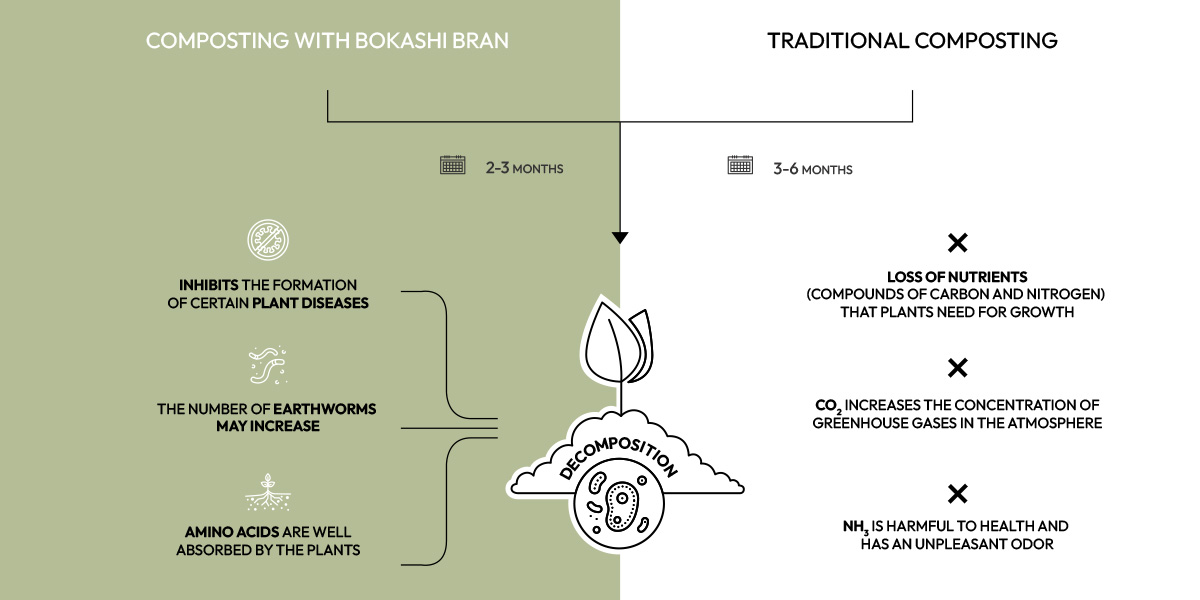 If you've covered the previous section, you now know that bokashi fermentation takes place in airtight conditions. This means that it requires some sort of vessel or container to collect organic material. Hence, by adjusting the size of these bokashi bins, this method of decomposition can be used indoors (indoor composting). As such, even urban dwellers can engage in proper organic waste management. Of course, to get the best results and to ensure user-friendliness of the highest level, proper urban composters must be used. The ones that ensure airtight condition to prevent any unpleasant smells and proper flow of the process. Moreover, high-quality bokashi bins must also enable easy bokashi liquid collecting and should be carried easily.

Speed of the process

It has been confirmed with extensive experimental data that bokashi fermentation ensures faster decomposition of organic waste. On average, it is 2-times faster. Though, we must point out that bokashi composting does not produce compost. Instead, it results in pre-compost or fermented mass. The latter can then be easily converted into compost in different ways. Two valid options are to add it to traditional or open-air composting. 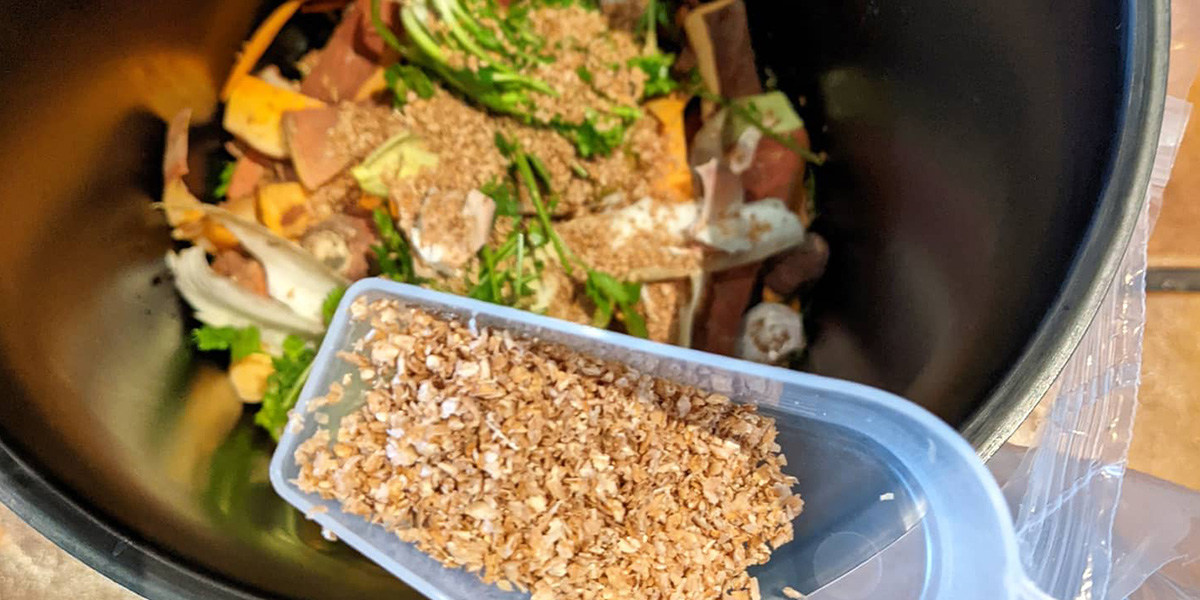 As a sustainability-oriented company, we believe that this aspect of the "composting vs fermentation" comparison plays the most important role. Due to the airtight conditions, bokashi fermentation produces significantly lower CO2 emissions. On average, the amount of released greenhouse gas emissions is 16-times lower with bokashi fermentation compared to open-air composting.

We've confirmed this benefit of bokashi fermentation with an in-house experiment. It consistently confirmed that the bokashi method reduced the volume of organic waste by 25%. As such, even if you are not utilizing the main (fermented mass) and the side product (bokashi liquid) of bokashi composting, you still contribute to a smaller amount of organic waste.

Bokashi fermentation is way less sensitive to the C:N ratio than composting. As such, you can add a wider range of organic waste to bokashi composting without disturbing the process. Thus, even complete non-composting-savvy individuals can have great results.

It's also been proven that the pre-fermented mass contains more nutrients than compost produced via traditional or open-air composting. As such, it can enable you to provide your plants with an even more nurturing environment. On top of that, you get fermentation liquid (also known as bokashi liquid or bokashi juice) as a side product. It can be used as plant fertilizer when properly diluted. Aside from using bokashi liquid for plants, it can also serve as a natural drain cleaner when not diluted. Moreover, in its non-diluted form, it is also a great natural homemade weedkiller. 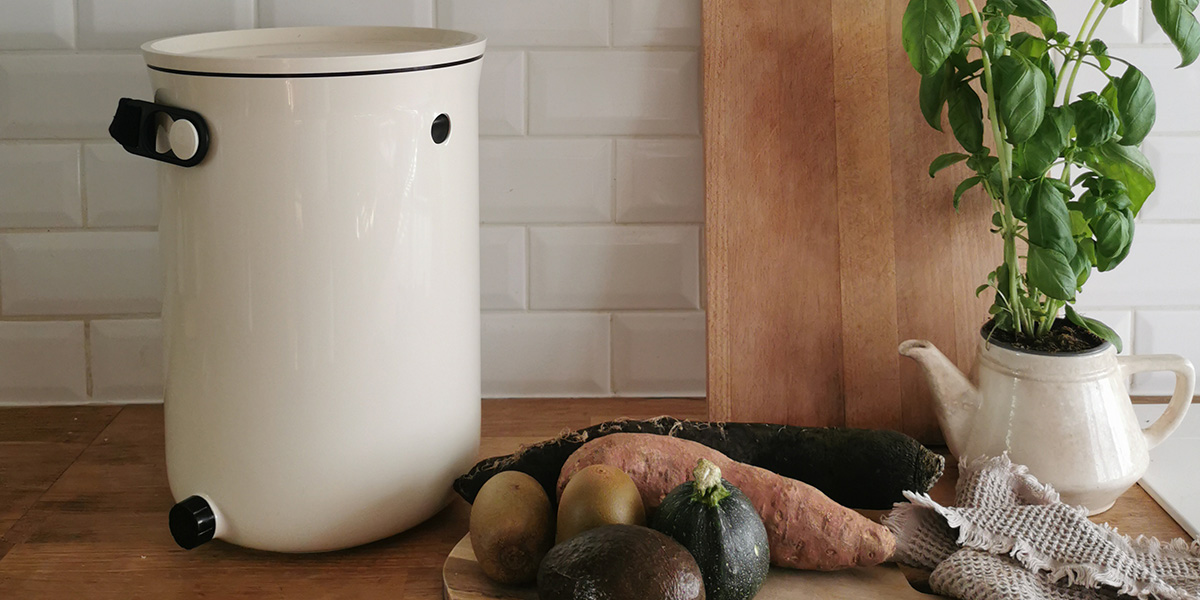 Looking at the list of main benefits, you ought to start utilizing the bokashi method to properly manage your kitchen waste. Moreover, if you are serious about being a responsible earthling, we encourage you to enroll in our Bokashi academy. There, you will learn all you need to know about the #bokashiloop - how to properly COLLECT, PROCESS, and USE organic waste, and also, how to CLOSE THE #BOKASHILOOP. Moreover, inside the bokashi academy, you'll also get a chance to dig deeper into the "composting vs fermentation" discussion with other folks from different parts of the world.