This article will provide you with an overview of the three main levels of composting organisms. This will give you a decent big-picture level of understanding. However, if you are eager to dive a little deeper, we will have future articles covering each level of the composting organisms in more detail. Without further ado, let’s jump right in.

The Levels of Composting organisms

Many organisms participate in the composting process, especially if the composting pile is located out in the open. Since the latter is more or less a normal practice for most farmers and gardeners, we will cover that type of compost.

As mentioned above, the most common division of composting organisms acknowledges three levels of decomposers. And, since coming up with interesting names is not something agriculture does, the levels have very ‘original’ names: level 1 decomposers, level 2 decomposers, and level 3 decomposers. Below you can find an overview of each of them.

Note: This type of division of organisms involved in composting is based on the source listed at the bottom of the article. Of course, several other divisions exist and there may be slight deviation among them.

If we simplify things as much as possible, we can say that the smaller the organisms, the more important is their role in the entry composting process. The smallest organisms obviously come in the greatest numbers and they represent food for larger ones. As such, they’re the basis for the entire food chain that takes part in the composting process. 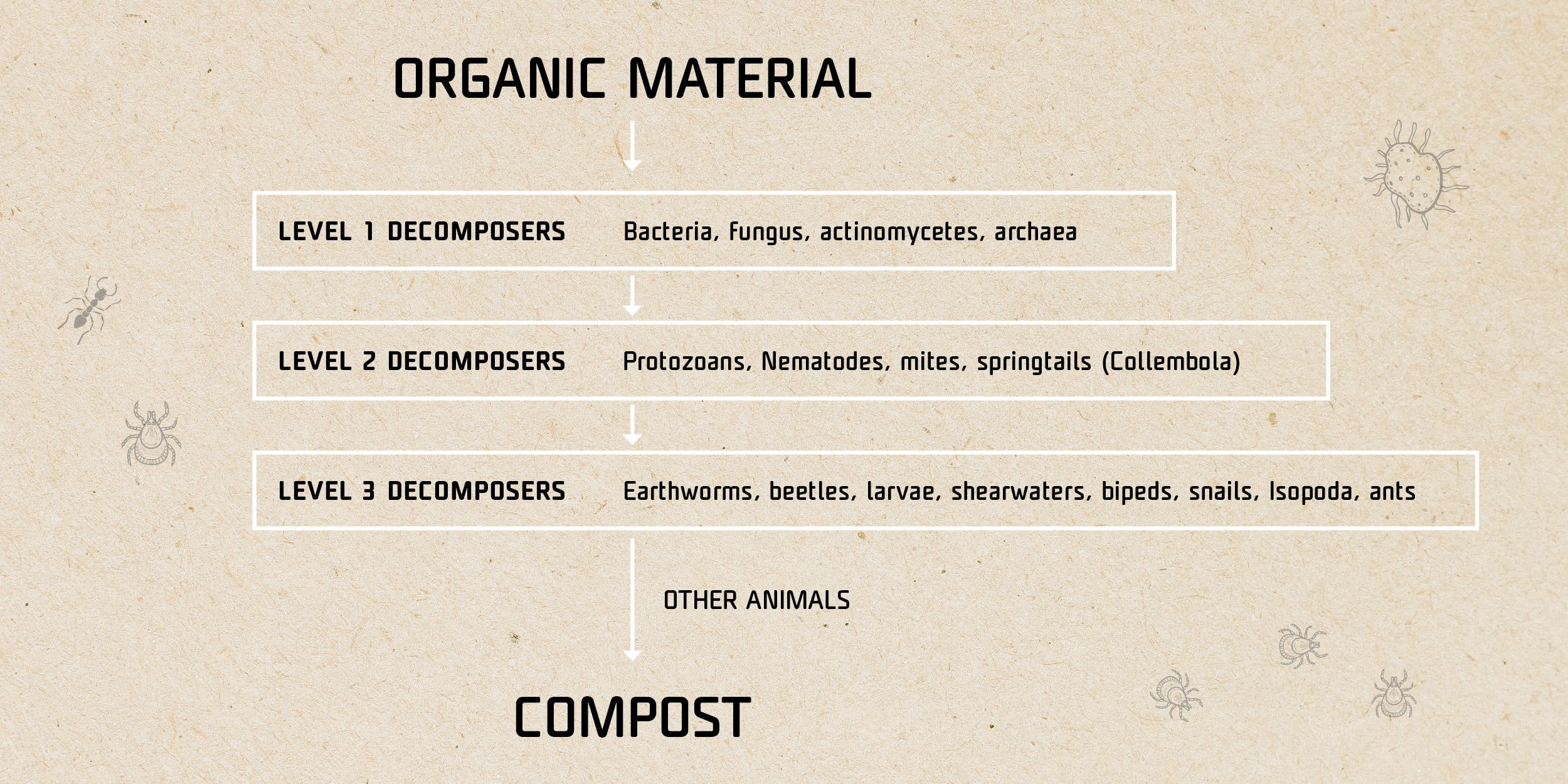 Level 1 decomposers are the most important composting organisms. Moreover, they are all microorganisms. This includes a wide range of bacteria, fungus, actinomycetes, and archaea. Thanks to their micro size, they come in huge numbers. Microorganisms directly feed on organic material, which is what we dispose of on composting piles.

The exact type of microorganisms and their numbers and ratios depend on many factors. These include environmental conditions, climate, temperature, moist levels, the amount of oxygen in the composting pile, pH levels, and the type of material in a pile (C:N ratio).

Level 2 decomposers are slightly larger than the representatives of level 1. The level 2 decomposers are Protozoans, Nematodes, mites, and springtails (Collembola). Moreover, some of them are still invisible to the naked eye, and thus still labeled as microorganisms (at least in the composting sense). The level 2 decomposers feed on decomposing organic material as well as on level 1 decomposers. In addition, this group of composting organisms also plays an important role in mechanically breaking down organic substances. This makes the latter much more easily accessible to the level 1 decomposers. As such, this forms a sort of win-win relationship.

Level 3 decomposers are the largest of the composting organisms. Of course, from the human perspective, these are still very small animals. Their size is above 0.5 mm, which means that we are able to see them with a naked eye. Their main representatives are earthworms, beetles, larvae, shearwaters, bipeds, snails, Isopoda, and ants.

Moreover, there are larger animals attracted by composting piles as well. This includes rodents, snakes, chickens, other lizards, and smaller mammals looking for food or shelter. All of these animals also fall into the group of level 3 decomposers. At the same time, it is those larger animals that tend to be the most off-putting and even scary (aside from chickens) to most farmers and gardeners. However, despite being considered a nuisance, they play a very important role in the composting process.

The main purpose that the level 3 decomposers play is to crush the organic material mechanically. Once the material is broken down into smaller pieces, the level 2 and level 1 decomposers access and process it more easily. Of course, they also eat the members of the above two levels and thus ensure that their populations are properly balanced.

In case you want to prevent any ‘larger animals,’ such as snakes and rats, from being able to access your composting pile, there are various protection options available. Most commonly, they come in the form of wired screens.

At this point, we would just like to point out that there is a composting method that is actually a fermentation process - Bokashi composting. This takes part in air-tight conditions (anaerobic decomposition). In that case, only microorganisms (level 1 and some level 2 decomposers) are involved in the initial decomposition process. As such, this method can be scaled down and used as an in-home solution for organic waste with many benefits. And this is exactly what we did with our Bokashi Organko line. If you are interested in sustainably solving your organic waste, make sure to check out this 4-in-1 in-home composting solution.

This is it for today. Stay environmentally friendly and enjoy life!

How to improve the quality of the compost

Is white mold in compost during the fermentation process good or bad?

Are you dealing with white mold in compost? Before we move ...
Start Reading